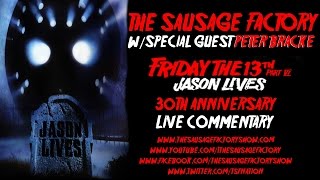 A source close to the Friday the 13th series reported to me that the CW network has officially axed their plans to produce a television series based on Friday the 13th. This will definitely come as good news to those of us who felt that the CW/Friday the 13th union just didn't fit. So what happened? According to my source, the network didn't jibe with the concept for the series. What was the concept? Apparently, that's the problem. After months of development, there was still

From NECA's official website: His name was Jason… or was it Roy?… and this was his mask. Own a little piece of horror history with this 1:1 scale resin replica from Friday the 13th Part 5: New Beginning! This hand-painted and exceptionally detailed reproduction features adjustable straps that allow you to wear it in comfort or hang on the wall. Includes the unique blue chevrons only seen in Friday the 13th Part 5! A great addition to any horror fan's collection. Now ya'll kno
4567
8