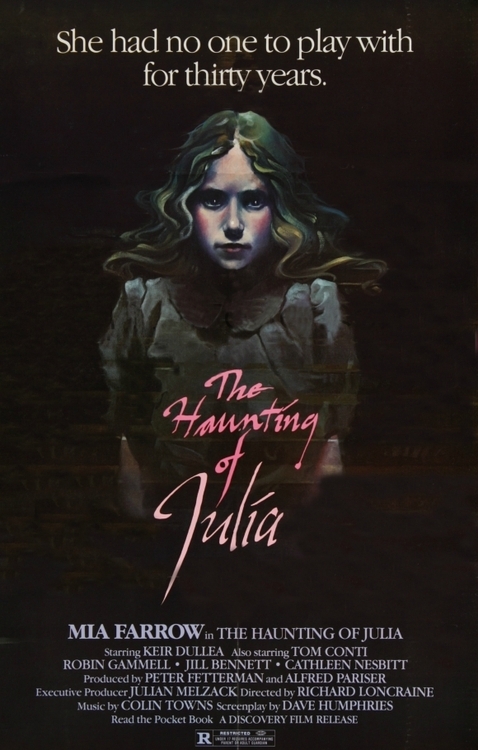 The grieving process is categorized in stages: denial, anger, bargaining, depression, and finally acceptance. When groundbreaking clinical psychologist Elizabeth Kübler-Ross developed this model in 1969, she could not have predicted that it would serve as the framework for one of the most underappreciated masterworks of horror cinema, 1977’s THE HAUNTING OF JULIA (known in the UK as FULL CIRCLE).

An adaptation of Peter Straub’s superb novel Julia, the film details the aftermath of Julia Lofting’s mental collapse after the death of her child. The opening scene surely places high on any parent’s worst nightmare: when her daughter Katie begins violently choking at the breakfast table, a panicked Julia frantically attempts a tracheotomy with a kitchen knife. The fallout is severe. Julia is devastated by guilt and self-loathing, convinced that she murdered Katie and slides through Kübler-Ross’s grief flow-chart. Estranging herself from her husband, she moves into an old, unkempt London flat and isolates herself as much as possible from the rest of humanity. Except the attic is full of musty children’s toys. And the presence of a little girl seems to intrude on her at her most vulnerable moments. A ghost or a projection of guilt?

THE HAUNTING OF JULIA is a rare breed of horror movie. Instead of establishing a direct threat to our protagonist, the movie draws us inside her world and traps us there. A dark atmosphere of sadness and foreboding consumes the film. A feeling of absolute dread lurks both inside and out of the “haunted” house. Most remarkably, the movie’s most intense moments come from the unlikeliest of sources: the testimony of a sleazy bachelor who knew a homicidally cruel young girl named Olivia who died, and especially the confession of that girl’s mother. This is the opposite of the jump scare; this is psychological warfare.

The major achilles heel of most “ghost movies” (calm down paranormal purists, I’m using it as a collective term to include hauntings, poltergeists, demonic residences, etc.) is an over-reliance on visual storytelling. An apparition’s on screen appearance can easily draw laughter instead of gasps if handled clumsily. Take, for instance, the CGI phantoms that infest (and I do mean infest, only not how the filmmakers intended) the 1999 Jan de Bont remake of THE HAUNTING. It’s damn near impossible to keep a straight face, let alone feel genuine tension when those cartoonish ghosts glide over the screen. Thankfully, THE HAUNTING OF JULIA takes another tact, presenting the ghost of Olivia/Katie no differently than any other character. When she “vanishes”, she does so by exiting the frame, not by disintegrating into an optical effect, which you might expect in a lesser movie. This choice allows us to feel Julia’s confusion, drawing us into her thoughts instead of pushing us away with an attempt at spectacle. As a side benefit, the film feels less dated as well.

Mia Farrow is not merely the point of view protagonist of THE HAUNTING OF JULIA, she’s the entire show. Coming nine years after her electrifying turn in ROSEMARY’S BABY, Farrow brilliantly reverses that earlier performance. Julia is the anti-Rosemary; as both maternal dramas escalate into high supernatural territory, the women diverge—Rosemary into hysterics; Julia into withdrawn brooding. With an unhealthily pale visage and fragile form, Julia seems ghostly in her own right, leading the viewer to wonder if the real specter haunting the London flat is Olivia…or Katie…or Julia herself. Subdued acting can sometimes lead to the audience becoming disaffected. It can a tightrope walk on sharp piano wire, but Farrow is surefooted. Good thing, too, since the entire production hangs on her.

Special attention must be drawn to the magnificent music of Colin Towns. A rock musician who’d collaborated with Deep Purple vocalist Ian Gillan in the early days of his career, Towns provides the film with a swirling, cagey electronic score that perfectly complements the movie’s gloom. Never overused, the music sets the stage, refusing to tell the viewer what they should be feeling, but rather becoming as well integrated as the set design, lighting, and acting. It really is a score that should be mentioned in the same breath as John Carpenter’s HALLOWEEN, Goblin’s SUSPIRIA, and Christopher Young’s HELLRAISER.

This Halloween—or, for that matter, any day of the week throughout the year that ends in “y”—treat yourself to one of the great unsung classics of the horror genre. Wait until dark, turn off the phone and the lights,  and let this resonate slice of misery have its way with you.

THE HAUNTING OF JULIA

Based on the novel by Peter Straub

Lorne Dixon grew up on a diet of yellow-spined paperbacks, black-and-white monster movies, and the thunder-lizard backbeat of rock-n-roll. He is the author of five published horror novels, including his most recent, Bleak December.